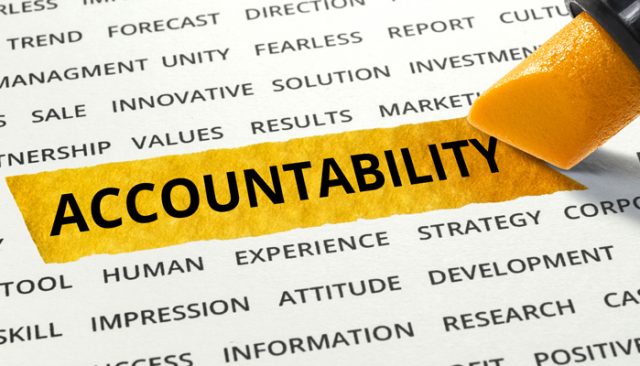 Owning up to one’s decisions, attitude and outcomes are what accountability stands for. It’s an invaluable skill both in professional and private concerns and, as such, highly valued by participating parties. In reality, however, accountability is still rarely found in average workplaces, mostly due to the obsolete business model still being intact.

Accountability is more likely to flourish in startups where success is closely tied to everyone’s participation and input. In that sense, it is best observed through innovation and agile methodologies. It is not helping that old-school executives are unwilling to change their behaviour to help employees get space for freedom and creativity.

That, however, cannot be an excuse. People striving to continually improve themselves normally shun finger-pointing even when they are alone in their beliefs. Accountability is a value rather than a skill, but that doesn’t mean that it cannot be learned.

Here are some practical tips on how to train your mind to be more accountable.

Accountability and productivity go hand in hand, and not without a good reason. When people take responsibility for their actions, issues don’t get any chance to escalate. In practical terms, that means that when a task meets a dead end, the participants will admit where the blame is due, and thus be able to focus on solutions rather than on exchanging accusations.

It goes without saying that when there’s no need to be on the lookout and the atmosphere is friendly, all team members will become more productive and relaxed. By extension, accountability contributes to the overall success of a company and makes it’s every employee proud of their role in the process.

There is a set of skills that will help you fine-tune your brain to being accountable in all settings, which include, but are not limited to:

· Acknowledging important tasks and working on them wholeheartedly

· Acknowledging any potential issues and solving them on time

· Owning up to individual mistakes and shortcomings

· Owning up to individual contributions and persistence

· Offering solutions and brainstorming ideas as and when needed

An accountable person will recognize the task they could undertake. They won’t wait for others to assign it to them; rather, they’ll actively seek to engage themselves and resume responsibility for their attitude and decisions about the task.

As mentioned above, accountability is a mindset rather than a skill, but a set of skills can help you improve your personality towards this goal. Honesty and responsibility are two crucial factors when building accountability and you should learn to always employ them.

Think Outside the Box

Much has been said about unconventional thinkers in the workplace, and conclusions vary depending on the business model. Traditionally, old-school business models still strive to keep to their value scale, but this practice is fated to either evolve to include new methodologies or to perish.

Therefore, do not be afraid to think outside the box. On the contrary, you should actively seek to add value to all your assignments, even when it seems impossible. It never truly is; even the most generic of tasks can be brainstormed, and the perception about it shifted as to include innovative ideas and approaches.

How exactly accountability contributes to this process may remain blurry to people used to traditional ways of doing things, but it is, in fact, rather glaring. The main problem is that most office workers are used to their working hours and only seek to do what can be done within this time limit so that they can go back to their lives.

Need we say that this approach is not only counterproductive but also a creativity killer? There is a better way to boost performance and add your signature even when performing a seemingly routine 9-5 job. One good way to do this is – effective task prioritization.

Digital nomads and freelancers have to become experts at this, and other workers should follow in their footsteps.

Mind the word “effectively.” Everyone thinks they’re prioritizing while they aren’t. Efficient prioritization doesn’t only mean sorting out daily tasks by importance. It includes a couple of additional feats.

For one thing, no matter how urgent the task is (aren’t they always?), it is important to allocate sufficient time for each without compromising your well-deserved spare time. Never skip breaks! Even if you’ll get half an hour or so more, your productivity will suffer. It is important to take regular breaks and unwind properly before going back to the task at hand.

Admittedly, much depends on the actual work culture when it comes to communication, especially when it comes to company updates and briefings. However, not everything is upon management. One important trait of accountability is taking your initiative. Communicate with your colleagues not only when tasks are pressing, but regularly.

By nurturing communication, all team members will eventually come to recognize every member’s strengths and weaknesses and know how to delegate tasks between them to achieve the best results. It’s only natural that not everyone will be brilliant at everything; rather than finding fault in others, encourage colleagues’ qualities and assign the tasks they’re weak at to other colleagues and vice versa. In this way, people will be inspired and encouraged to improve themselves and deepen the bond between team members, which is a win-win no matter how you look at it. After all, nobody is happy when working with a team of dissatisfied people.

Work on Self- and Team Confidence

Building self-confidence is a continual task, but building mass confidence within a team is even more complicated – especially when people are lacking in self-esteem. Let’s be quite frank – there are always such people and particularly when solutions for poor results are enforced by an added pressure.

Need we say that this strategy never works? Accountability is all about building a lasting bond between the employees with them rightfully seeing company success as their own. When everyone participates in every task and everyone shares in success and owns up to their mistakes, there’s no space for pressure and stress. People admitting their shortcomings will work hard to overcome them, and that is what drives success in the long run.

Lastly, it is crucial that leadership recognizes accountability and encourages it by applying the very same principles they expect from the rest of the team. It’s not much to ask when everyone always gives their best. After all, success depends on the joint efforts of many. There’s no reason why everyone shouldn’t share in good and bad times.

Everything You Need to Know Before Choosing GC Training in India

Why should you take NEET Mock Tests