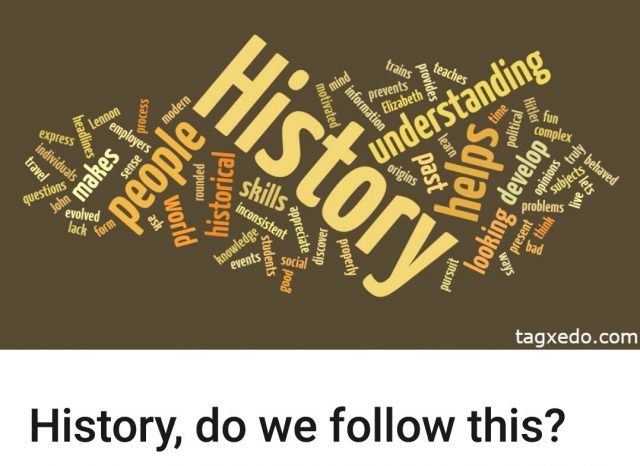 The word history, as we all know talks about the facts, some of which we already know and some which we try to know either by reading books, discussing with people, through social media, internet or by self-exploration.

The history which we already know, we keep speaking it, again and again, or repeating it so that the history is again remembered or retained with the current pace. The history which we are trying to know about always sounds interesting. Sometimes we run behind history even though if it is not necessary diverting from the daily and regular work as history has become necessary for daily and future success sometimes also leads to failure.

Histories only deal with fact, now a day’s imagination has also become part of history which is not true, but let’s see how.

The fact is the one which oneself has seen with the naked eyes and keep following the fact, such fact following people face tough times in the society when dealing with people in terms of protecting someone, maybe it might be related to business or Job. Over a period of time, the fact can be modified based on the location or place where in the people live in a different kind of society. The other set of people try to distract or divert from the fact, which others have seen, and in today’s world it is difficult to keep the fact in long run and this fight was there yesterday also and now also it’s the same and it may continue further in the same way.

The second one is the imagination, this is created and destroyed in a short span of time, and such imagination is created by a group of people, who belong to a common race, an excuse to fight against the fact. This image may only be valid in certain location or place, which resembles the same group of people, who have created this image. This may be dangerous and may harm the people in the society and leads to people fighting in the society. There is a possibility that this image can be considered as fact if it spreads with unimaginable speed.

Considering all the above facts it sounds like, maintaining the history has become much more difficult than creating a history and this may sound ridiculous to you all but this is what we keep seeing in the society.

Actually history must be used as a reference, as a part of lesson learned to correct the same in future, but in the current century, people use this as a tool in form of new technology to drive the direction of the work in a particular format, then what about the current tools and technologies, are we mixing them with history. I know you are now thinking; yes this seems to be almost true. Remember mixing the histories with the routine work spoils the current work and personal culture if it is used in a wrong way and it may improve the personal and work culture if positive side of this is taken.  This is the message which I am trying to bring with this article.

You Should Follow These Golden Rules for Playing Fantasy Cricket